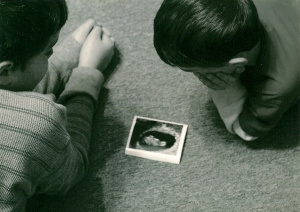 Gavin & Liam ponder their new sibling, due in July 2013

You know how you watch “American’s Funniest Home Videos” and they inevitably have the clip(s) where the couple informs their parents (on video, of course) via some unexpected way that they are expecting a baby?  I always thought those clips were so phony and the people involved were actors, or just plain ridiculous.  Well, up until now, that is.

We had Christmas dinner at my eldest daughter’s family’s house, and my son-in-law’s parents also came down from Watertown to join in.  After the nice dinner of ham, potatoes, veggies, breads, olives etc., we all sat down in their livingroom to pass around/open Christmas presents each had gotten for the other.  The first thing received was a Christmas card in a beautiful red envelope, and both “mother’s” were urged to open them and read.  Upon opening mine, I became so enthralled with the OUTSIDE of the pretty card that I handed it off to my husband to share the pretty sentiment BEFORE I read the inside.  I saw that there was “something” loose on the inside of the card, figured it would’ve been a photo of my two gorgeous grandson’s, and waited for my husband to finish perusing the outside of the card before he would hand it back to me and I would admire the photo enclosed.  My husband took the time to look at the photo, AND the inside of the card before handing it back… and I’ll never forget that peculiar look on his face.  Meantime, a commotion started in the livingroom, as my son-in-law’s mom had taken the time to read the entire INSIDE of the card and it began to sink in.  I finally grabbed back the card from my husband and looked at the photo (as seen above).  It didn’t take me only about 3 seconds to realize I was looking at a sonogram!  This was something my husband had never seen, so he didn’t know what to make of the photo when he looked at it.  THEN I read the inside of the card and it became all too clear.

For a split second I thought maybe I was being punked.  After all, Kristen’s final words after hours of laboring with Gavin were “never again” in a seething, pained, rasping voice that could only be compared with Darth Vader… and true to her word at the time, Liam was adopted.  And now, could it be?  And then I remembered those silly people on AFV and realized I had just become one of them… without the advantage of being video-taped.  All I remember after that was pandemonium.  At one point, I thought maybe my head had exploded, but I kept checking and it was still intact.  It didn’t FEEL intact.

I think it was only about 1-2 months ago I was wistfully telling Al that I wanted to make another baby quilt for someone.  I remember actually searching for someone in my area of friends/acquaintances and even church friends looking for someone to bless with a new baby quilt.  Hallelujah!  Now I have a reason to make a baby quilt… or two or three.  We don’t know whether boy or girl yet, but I can put together something totally appropriate for either in the blink of an eye!  And, once we know for sure that it’s a girl, I can make more… in pink!  Did I say something about a “girl”?  Well, here’s hoping!