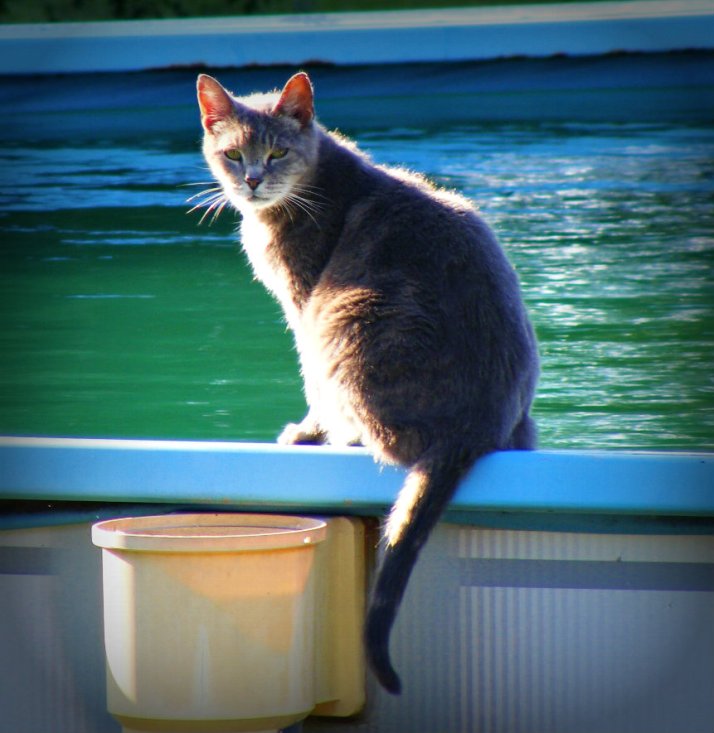 I never thought I would have to put one of my pets “down”, let alone be writing in the aftermath of seeing him euthanized.  I mean, it’s just a cat after all, right?  C’mon, it’s just a cat.

We had two cats:  a black cat, Phoebe, that my husband had prior to our marriage.  Then in 1999, one year after our marriage, he got me the Siamese cat, Sumi, that I had wanted.  However, I wanted a “lap cat”.  Phoebe made it well known that she hated me.  I was a usurper of the man she had to herself since she was a kitten.  Sumi, being the persnickety Siamese breed that she is, was too proud and nonchalant to be wasting her time on someone’s lap.  So, we decided to visit the local SPCA to see what they might have to offer in the way of a lap cat.

The SPCA was quite full with cats who wanted/needed to be adopted.  I had been around cats all my life, but particularly liked Siamese, or other “unusual” breeds (Persian, Burmese, Himalayan, or even calico).  A white, long hair cat immediately caught my eye, but the husband saw this grey tabby that was just sitting quietly amidst all these meowing, milling felines.  We both pleaded our case to each other for the cat we wanted, but the grey tabby won out in the end.

Going through the adoption process, we found the cat’s name is “Doug”, and that his previous owner was an elderly man in an apartment who said that Doug meowed too much and was too loud for his neighbors.  As calm and unassuming as he looked, we figured Doug would be a good, honest lap cat, so we finished up the paperwork for the adoption.

That was about 9 years ago.  Doug turned out to be not such a great lap cat for me, as he fell in love with the husband’s lap instead.  When the husband did not want to host Doug on his lap, I got sloppy seconds.  When we brought Doug home, we were concerned and waited to hear this awful meowing that his previous owner gave him up for.  It never happened.  In fact, Doug would look at you when he wanted to be fed, and he’d open his mouth and nothing would come out!  Sometimes he just made a squeak.  He was the quietest cat I think I ever knew!

He was the most loving cat.  He especially took a liking to our Golden Retriever, Jammer, and would habitually cuddle up with the dog in the dog’s bed and rub himself all over the dog’s face and lick him up and down.  They often slept all night together.  His relationship with our two other cats, however, was less amiable.  However, this low-maintenance feline was endearing, and although I tried not to show it, he had captured my heart.

When we brought Doug home, he was “hefty”… his belly almost reaching the floor as he walked.  And he was less than ambitious, to put it kindly.  So we nicknamed him “Doug the Slug”, but he seemed happy with it.  Just a year or two ago, Doug started losing weight and having trouble with repeated ear infections, so off to the vet at the Purr-fectPlaceAnimalHospital.  Dr. Fine had been our vet since 1998, and the husband took Phoebe there since she was a kitten.  We trusted him.  He discovered that Doug was obviously unable to eat the hard cat food we’d been feeding our cats because he no longer had any teeth!  At the same visit, Dr. Fine confirmed that Doug was approximately 15-16 years old ~ quite an elderly feline.  The ear infection was treated and we were advised to feed Doug canned food from now on.

He seemed to regain his weight, but continued to have recurring ear infections that were quite nasty.  Again I took him to Dr. Fine just a couple of months ago, and the diagnosis was a tumor in his ear canal.  The prognosis was not so good, and Dr. Fine said to take him home and make him comfortable for whatever time he has left.  He said we could “talk euthanasia” at some point in the future, if we wanted to.

Doug’s health began a downward spiral.  He ate canned food, but his weight fell off and he became less and less active.  Finally, he stopped eating and no longer used the litter box (he just didn’t go).  He spent most of his days sleeping in what appeared to be a semi-conscious state, and when he went from room to room to find the warmest spots, he staggered rather than walked.  The past couple of days he just teetered.  It was a hard decision to take him to Dr. Fine for the last time, but I knew he would never recover, and his quality of life was so diminished.  I finally convinced the husband that this was the appropriate route, and made the appointment to take him this afternoon at 4:45 p.m.  I stayed with him while he received the injection, and Doug passed away quietly and peacefully in just a minute or so.  I brought him home, and the husband just buried him outside under a tree ~ even in the hard winter ground.

Now it hits me just how much a part of our family was Doug.  He will be terribly missed, but at least I know he’s no longer in pain and discomfort waiting for the end to come.  “Just a cat”?  I think not, but so much more.