They’re baaaack!  The cicada killer wasps are always so intimidating as they emerge/arrive for their 3-4 week takeover of our front, back and side yards.  This is the eighth year they have invaded us, and I never get used to them!

First off, they arrive pretty much without warning, just when you’re getting used to the honey bees, the flies, mosquitos and smaller species of pesky flying insects.  The females burrow underground, kicking up dirt PILES as they go.  And the males all fly around the yard, cruising just above the grass, looking for a female to make his own… for awhile anyway.  These insects are just massive in size, that’s why they’re so intimidating.  Our first year discovering them, I almost had a massive coronary.  But we researched and learned all about them, and how really docile they are.  I think it took me at least the first 4-5 years to really believe that!  The first couple years, I defended myself whenever I walked outside with a full size tennis racket.  Then I became more at ease when I discovered I could literally drive my Troybuilt Pony lawn mower right through them all without repurcussions.  They do not sting you.  Let me say that again… they do NOT sting you.  They’re almost as big as my flippin’ HAND, but they are not aggressive. 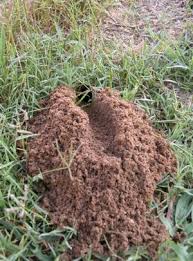 This ^  ^  ^ ^ is what one looks like compared to a human hand.  (not my photo, borrowed off the web just to give you an idea of the size)   And when you see one coming at you carrying an actual dead cicada, you MOVE ASIDE QUICKLY.  I have seen them carrying still struggling, live cicadas in flight.  You don’t forget that sight too soon.  The females burrow underground in a web of tunnels, then lay their eggs to hatch the following summer.  In the early years of trying to combat these pests, Al once took gasoline (?) or kerosene (?) ~ something really flammable ~ and one evening just about dark (when they’re all back in their nests) he poured into each of the burrows all over our front yard with the intention of killing as many as he could.  When he lit one of the nests, the entire front yard went “WHOOSH”! and all of the interconnecting corridors all lit up underground, but we could see it all since the corridors are not that deep underground.  He ended up stomping quite a few little fires out rather quickly that evening!  I watched the whole episode from the safety of the front deck ~ wish I’d gotten a picture of THAT!  LOL!  We quickly learned not to combat them, but to live and let live for the few weeks we share the property.

Does anyone else share our affinity with cicada killer wasps?  Want to see them first hand?  They should be in absolute full swing over the weekend through late August.  Bring your tennis racket and practice your swing.

Until next time, TTFN ~ Tamara Eckstadt