The American Robin (Turdus migratorius), also known as the Robin or Common Robin, is a migratory songbird of the thrush family. It is named after the European Robin because of its reddish-orange breast, though the two species are not closely related, with the European robin belonging to the flycatcher family.

The American Robin is active mostly during the day and assembles in large flocks at night. Its diet consists of invertebrates (such as beetle grubs, earthworms, and caterpillars), fruits and berries. It is one of the earliest bird species to lay eggs, beginning to breed shortly after returning to its summer range from its winter range. Its nest consists of long coarse grass, twigs, paper, and feathers, and is smeared with mud and often cushioned with grass or other soft materials. It is among the first birds to sing at dawn, and its song consists of several discrete units that are repeated.  (from Wikipedia)

On April 29, 2013, Al and I discovered a robin’s nest in the arborvitae we have planted just off our front deck, but right in front of a window situated in our dining room.  We had noticed a pair of robins that were particularly aggressive around our front yard recently, and finally caught the mother bird darting into the brush near the house where she ordinarily would never go.  Al got suspicious and investigated, finding this beautiful little perfectly-formed nest.

On May 7th, Al checked the nest and sure enough!  there were four little blue eggs in there!  Well, we knew we’d simply have to “fix” the dining room window so we could readily peek into this miracle of nature nest at random.  Al took the outside screen off, and snipped a couple of the branches of the arborvitae that were potentially in the way.  We still would have to gently move a branch to peer into the nest for updates, but at least it would be easier!  Except we were faced with the mother and/or father robin screeching at us from the grond and warning us to stay away! 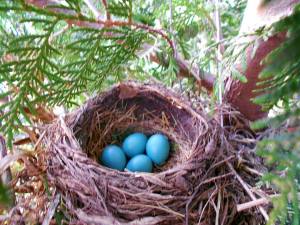 Just yesterday, May 17,  we peeked again and found newly-hatched baby robins!  How exciting!  We will keep an eye (or two) on them as they continue to progress and fledge… despite parental objections. 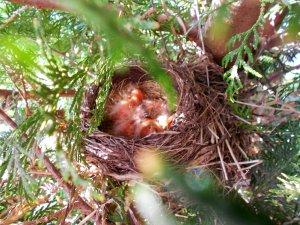 Hope you enjoyed this peek into the world of the robin.  I’ll post updates as the babes progress.  Thank you for stopping by.  Until next time, TTFN ~ Tamara